Why We Lack Maintenance Culture in Nigeria

John arrived at the Muritala Mohammed International Airport at about 6:30pm on board a British Airways Plane.  He had hoped to collect his baggage within a few minutes and dash off to see his parents who he had not seen for over ten years.  But he was expecting too much for the luggage would not come out until about two hours.  What’s up?  He exclaimed!  The conveyor belt was not working.  The luggage had to be manually carried from the plane to the baggage claim hall.

While waiting, he suddenly discovered that not only that he was back in the tropics but he had to unbutton his jacket first, then his waist coast and later the shirt.  Why?  The hall was no better than an oven.  The air-conditioner was not working!

While the waiting continued still, he felt like answering nature’s call and following the sign and arrows he arrived at the Gents but he quickly rushed out.  Why?  The water closet (wc) was broken, there was no water and yet some sons of Adam had eased themselves there and so the place was stinking!  Waoh!  He exclaimed.

As they drove through the streets heading towards Surulere, John had noticed that every place was dark but he could locate the street light poles by the aid of the car head lamp but there was no light!  What’s happening men?  Haven’t you people got electricity in this Godam city?  He was told that it is normal to be in darkness for days without light here, the only abnormal thing is to see street lights on when the houses have not even got light, for where?  Back at home they had to make do with hurricane lamps and candle.  His hope of watching his famous stars, the Williams Sisters, played on Super Sports that night was dashed!

The following day, John set out to deliver the numerous messages he had brought from theU.S.A.  His first port of call was the 1004 Flats in Victoria Island.  He had looked forward to see the magnificent structures he used to see in the early eighties when his cousin, a senator lived there.  What a disappointment!  He had to climb twelve floors.   The lifts had stopped working a few years back, he was told.  Even if the lifts were working, there was no light as the generator that served the estate had packed up few years back.   (This was before the sale of the flats).

Then he had to see somebody in Festac and Apapa before returning to Surulere.  He had thought he could dash from Victoria Island to Festac and Apapa within one hour since it is all on express road!   He was disappointed.  It is no longer the express road he knew! The service lanes are completely impassable, while you have to meander and look for solid areas to drive on what is supposed to be the express lanes.  Then he was to see a relation in Ibadan.  There again, the expressway he knew in the eighties is no longer the same!  Where is the ministry of works he asked?  He was not even aware that there is FERMA whose responsibility it is to maintain the roads.

All these did not amuse John but he was yet to complete his experience.  The following weekend he decided to visit the National Theatre to watch a film which had earlier been advertised.  Yet again, he had to abandon the film half way unless he was ready to suffocate!  Why! The air-conditioners had ceased to work several months ago.  Earlier on he had asked question on why people should queue for petrol in a country that is blessed with oil free from the soil.   He was told that the crude is available in abundance, the shortage is that of refined oil.  Then the refineries?  He was told they were waiting for TAM.  Who is TAM and why has he decided to refuse to visit the refineries thereby causing all these hardship?  He queried.  He was told that TAM means “Turn Around Maintenance”.

John shook his head and was lost in thought for a few moment then he exclaimed- all my problems since I came back has been due to refusal or neglect of Maintenance.   From the Airport experience to PHCN black out, lift in 1004, National Theatre, Fuel Queue, Bad Roads, etc. mention it, they are all due to our lack of maintenance culture. Why should we build the best Airport in Africa but allow it to malfunction because we won’t maintain the facilities? 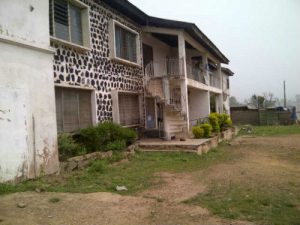 What then is MAINTENANCE?  What does it demand that we cannot meet?  Do we lack the fund or the expertise or are we just being irresponsible?

Maintenance works can be described as those works necessary or carried out in order to keep or restore every facility or every part of a building or machinery to an acceptable standard.  What is acceptable standard is however subjective.  In developed countries, the acceptable standards are set by law although these are primarily directed to health and safety of occupiers of a building, or operators of a machinery.  The main purpose of maintenance are to preserve a building or machinery in its initial stage as far as practicable so that it can effectively serve the purposes for which it is built or made.  Additionally, maintenance is meant to retain or preserve the value of investment and present a good appearance.  From the foregoing, it is clear that without maintenance, a building or machinery will not be able to serve the purposes for which it is made.

This is why our lifts don’t work, our refineries can’t refine oil, our turbines and thermal plants can’t generate electricity, our transformers can’t distribute electricity, our conveyor belts won’t convey anything, air-conditioners won’t condition any air, our roads, won’t be motorable etc.  when we refuse to maintain them.

It is difficult to decipher how and why we came about this lack of maintenance especially of all our public utilities.  Because in our individual lives, we do maintain our properties!  For example, we all know we have to maintain our cars by regular servicing if we want it to continue to function.  I wonder how many people wait until their cars break down before they know it is necessary to service it!  Why then do we not apply this same when we are in charge of public utilities like the ones mentioned earlier on.   For example, how much will it cost to repair or replace the air-conditions at our gate way to Nigeria, the Muritala Mohammed Airport?  Or why will the NAA wait until the conveyor belt is no longer working before they know what to do?  For God’s sake why will somebody prevent the Turn Around Maintenance (TAM) of our refineries.  It is like not giving the hen that lays eggs food and still hope to get eggs from it.  I can hear you saying they did this because they hope to make money on imported fuel!  But what will they gain from non maintenance of roads, non maintenance of lifts, non maintenance of air conditioners, etc.  there must be more to it then.

One school of thought has traced the lapse to the dichotomy that existed between the powerful “Administrative Officers” and the Technical Officers that carried out maintenance works.

The Admin officers (non-technical officers) who allocate money are usually not favorably disposed to allocating sufficient funds for maintenance purposes.  They usually see such fund as money for the boys in the technical areas.  They will rather award contracts for replacement where they can have their kick backs.  Hence they will rather buy a new generator or vehicle than spend money to maintain existing ones.  They will prefer to award contracts for the re-construction of roads than provide money for its maintenance.

Whenever there is need to balance a budget, the areas usually looked at is the maintenance budget.  At least I can testify to this.  There was a time I proposed that we set aside 20% of the income generated from our properties for maintenance since most of the facilities were old, I was embarrassed the way I was shouted down by the finance officers!

Because of insufficient provision in the budget for maintenance, once the sum provided is exhausted many maintenance jobs are therefore left undone.  The consequence of this are very many.  “A stitch in time saves nine” is a popular saying.  Therefore failure to carry out the repair of a little damage today may lead to greater damage or total collapse of the system later.

The sad experience of citizen John can be avoided if our policy makers will listen to the professionals whose duties are to maintain our facilities.  Let sufficient provision be made for maintenance of existing facilities in our annual budgets and such money released promptly when the need arises.  We should not wait for total breakdown before we know we should repair or service any equipment or facility.

The era of replacement should be over now that the costs of replacement of many equipment or facilities are too prohibitive.  With one US dollar exchanging for N150.00, it costs a fortune now to purchase anything from generators to lifts, air-conditions and what have you.  Let us therefore cultivate the habit of maintaining what we have so that we can prolong their life and make them serve the purpose for which they are meant.

Administrative and finance officers should look less with suspicion towards provisions for maintenance.  After all, we all together suffer the consequences of lack of maintenance like black outs, fuel shortages, heat, bad roads, etc.  We should let our stitch in time same many and not even nine.